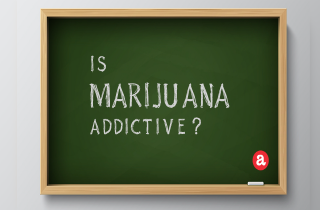 Cannabis is a drug that is considered by many as a gateway drug to other dangerous substances. It has also gained popularity in most circles due to the two common myths associated with it. First, there is a myth that cannabis does not harm the physical health of users. Secondly, many people are asking if weed is addictive.

When you smoke tobacco, it releases harmful chemicals to the body through the combustion process. Since cannabis and tobacco are smoked, they can potentially have similar consequences. Cannabis smoke contains compounds that are like those found in tobacco smoke. Furthermore, since cannabis smoke requires to be inhaled, it might cause more harm to the lungs, leading to more exposure.

When it comes to addiction, past studies have shown that cannabis can be addictive to people when consumed for long. However, cannabis is not as addictive as other stronger drugs like cocaine or meth. But cannabis still has some level of dependence.

Why is marijuana addictive?

Over the last couple of years, many people believed that cannabis was not addictive because it does not have the same compounds found in other drugs like alcohol and methamphetamine. But due to vast studies on both cannabis and addiction, many people have now understood the severity of cannabis addiction. Reports from the NHS show that as many as 10% of regular users end up psychologically addictive to marijuana.

There is a clear distinction between psychologically and physically dependent. Although cannabis leads to several effects on the body whenever it’s used, there also exist symptoms that would suggest physical dependence. Cannabis addiction mostly lies psychological, which makes it different from cocaine.

According to a study conducted by researchers at the University of Texas at Dallas’ School of Behavioural and Brain Sciences, it was concluded that long-term cannabis use permanently blocks some brain functionalities, which leads to psychological dependence after long-term consumption.

During the study, participants who have never used cannabis showed no significant difference in brain activity when the cannabis-related pictures were shown.

Can you treat marijuana addiction?

Since cannabis addiction is psychological, it can quickly be helped. The use of cannabis does not have to control your lifestyle activities like what you do, where you go, the kind of friends you keep company with, etc. It is highly dependent on the person whether he/she should stop using the drug once and for all.

One preferable method for cannabis addiction is psychotherapeutic treatments, which include things like support group participation and cognitive behavioral therapy. The reason for these treatments is to make cannabis addicts understand why they consume so much marijuana. Treatments help users to understand the difference between the tendency to use cannabis and the problems it causes in your life. Psychotherapeutic treatments provide solutions to help you avoid continued use.