Cachexia is a syndrome characterized by the unintentional loss of weight, fatigue, muscle atrophy and significant loss of appetite. The notable weight loss cannot be recovered nutritionally. Cachexia is caused by underlying conditions such as infectious diseases, autoimmune disorders, respiratory disorders, hormonal deficiencies or cancer. It is more commonly diagnosed in the late stages of cancer patients, with 20% of all cancer deaths caused by cachexia. Cachexia is also associated with anorexia, which is the general loss of appetite.

Cachexia, as a wasting away condition increases the chances of death of patients with already pre-existing conditions such as cancer or HIV. Due to the significant loss of appetite, it debilitates the patient to complete immobility. Anemia is also recurrent in cachexia patients. This condition has a poor response to treatment.

Overtime, the condition worsens and patients begin experiencing greater weight loss resulting from the complete loss of appetite. Those who suffer from cachexia have a low quality of life because their muscles waste away causing general body weakness, fatigue and the inability to engage in any social activities. Victims of cachexia are unable to lead a normal life because the condition reduces them to disability.

Often referred to as marijuana, cannabis is a plant with psychotropic properties unlike any other plants. It contains cannabinoids such as tetrahydrocannabinol (THC) which affects the mental state of individuals who use it, along with an array of other cannabinoids. Marijuana is used for recreational, medicinal and industrial purposes. In recent studies, it has been shown to alleviate the symptoms of some chronic diseases.

Cachexia is an intricate condition whose primary negative effect is unprecedented weight loss.  Patients experience significant loss of their body mass with percentages as high as 10%. Treatment of cachexia is mainly targeted at reversing this effect. The psychotropic property of cannabis makes it an effective in the alleviation of symptoms associated with cachexia. 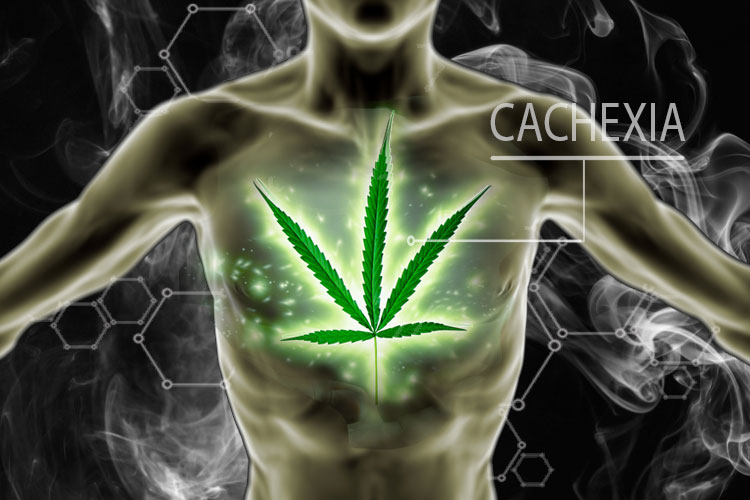 The loss of appetite in cachexia patients is often treated by intravenous feeding, the administration of appetite-stimulating growth hormones such as testosterone, diets or drugs such as Megace.  Some of these methods are counter-productive because the constant introduction of growth hormones or drugs to the immune system has its own detrimental effects. Furthermore, most of the drugs used to stimulate weight gain only do so in the form of fat while cachexia causes weight loss in lean tissue such as heart tissue. Diets are ineffective because cachexia is accompanied by weight loss and lack of exercise. Evidently, these other methods of treatment are problematic and inefficient. When left untreated, the loss of appetite leads wasting away of the patient’s body and degenerative muscle weakness.

Marijuana is known to be a great appetite stimulant. Patients who use it regularly increase their appetites without having to deal with the harmful effects of the other methods of treatment. The cannabinoids present in cannabis interact with the body system that regulates food intake. THC influences the neurons which convince the brain that it is hungry and needs to satisfy this hunger. Marijuana has been responsible for the significant improvement in the appetite of cancer patients suffering from cachexia and in the stabilization of body weights of HIV/AIDS patients suffering from it.

Muscle weakness generally results in physical inactivity.  It is impossible for cachexia victims to engage in any physical exercise. However, cannabis boosts the physical productivity level of cachexia patients. It increases their energy levels thereby lowering the risk of atrophy and it generally improves their moods. It speeds up metabolism and improves digestion. This increases the calorie intake of the patient without detrimental side effects.

Cachexia patients are prone to suffer from depression. They are unable to have a social life and are always dependent on others. They cannot feed themselves and watching their bodies waste away causes a lot of despair. Many become suicidal and live in emotional anguish. Marijuana helps to take away this feeling. The psychoactive property of THC gives cannabis a euphoric feeling. Therefore, patients who use it often end up with a euphoric feeling, getting rid of all depressive thoughts.

The battle to legalize the use of marijuana is still ongoing in many nations. Since it is the most abused drug in the world, governments are reluctant to legalize its growth and usage. As a result, many cachexia patients waste away because they have no access to marijuana which is efficient in treating its symptoms.

However, cannabis with a high THC content has side effects such as paranoia. Many doctors support it while others remain skeptical about the utility of cannabis as a medicinal drug. Regardless of the side effects which can be controlled by regulating its use, marijuana is the most efficient and less expensive way to treat the adverse symptoms of cachexia.

Its use has been associated with a lot of stigma and government hurdles. On the contrary, more resources should be dedicated to the research and advancement of the medicinal properties of cannabis. Advances in the medicine necessitates the need for further study of cannabis in treating many common chronic diseases which have high mortality rates. The utility of medicinal marijuana is unfathomable if only governments would give it a chance to help heal their ailing populations.

It is unrealistic for people to live a life of pain and anguish or have an early grave because of cachexia yet there are avenues that can be explored to help these people. Marijuana increases the life expectancy of cachexia victims and allows them to enjoy a high quality life. Therefore, every effort should be made in realizing this dream sooner than later.

I called their clinic as soon as I got my patient id #. Booking the appointment is quick and easy. I like that they ask me questions and make sure my condition is qualified and i have all the required paperworks before sending me to their clinic. Consultation took about 20 mins then i got my medical marijuana approval the same day.

Called their medical cannabis clinic to see if my condition can be approved. The lady on the phone was very helpful and asked me several questions to make sure I can be certified and I met all requirements before I come for an actual appointment. I don’t regret choosing them to help me. I’ll see them after a year for my renewal.

They gave me a compassionate discount on my appointment. Waiting for my ID # from the commission took days but this clinic is patient with me and assisted me until I was completely certified.

I made some research about medical marijuana and found it really effective for patients where the traditional method of treatment did not work. It helps a lot in pain management with very little side effects compared to those pain meds